Smitten is a comedy drama about a fragmented group of old school friends with each episode focusing on one particular character. The pilot episode tells the story of Bronagh, who discovers she’s pregnant on the same day her ex-boyfriend Dave goes missing after a drunken night out. Her new life is put on hold as she searches for him. Can she find him before the news does? And will she be able to reconcile her past with her future?

It was released on RTÉ Player in January 2016 along with four other pilots, which will serve as tasters for potential new series.

Smitten is written and directed by John Morton and produced by Ruth Carter. 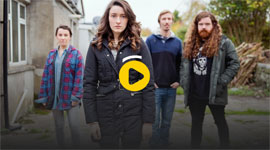